The prospect of Catalonia seceding from Spain has never looked closer. Following a messy referendum vote on the matter (which the Spanish government refused to recognise but sent police in to prevent from taking place) and a series of protests, there seems to be a real possibility of a split taking place. But what might the economic consequences be?

In terms of size and population, Catalonia is comparable to several European countries, such as Switzerland. Although it has 16% of the Spanish population, it generates 19% of Spain’s GDP and 25% of its exports. Its GDP per person is currently 14% higher than the EU average (but slightly below that of other regions of Spain such as the Madrid region, the Basque Country and Navarra). Meanwhile, the rest of Spain has a GDP per person of about 10%-15% below the EU average. Unemployment is also lower in Catalonia than in the rest of Spain, and similar to that of the region of Madrid.

This means that Catalonia, as well as the new Spanish state that emerges from a split, could be perfectly viable countries on their own. There would, of course, be economic consequences for both following a split – but these may be worse in the short-term than the long-term.

In terms of tax collection, Catalonia would immediately gain and the rest of Spain would lose from secession. This is because Catalonia transfers significantly more to the central Spanish government than it gets in return in the form of public services and investment. Some estimates suggest that Catalonia transfers up to 8% of its GDP a year.

Part of the gain would most likely be used by the new Catalan state to repair an underfunded railway system and other infrastructure that successive Catalan governments and think tanks claim to be critical. For example, in the port of Barcelona and the railway system that connects Barcelona with cities across the Mediterranean. 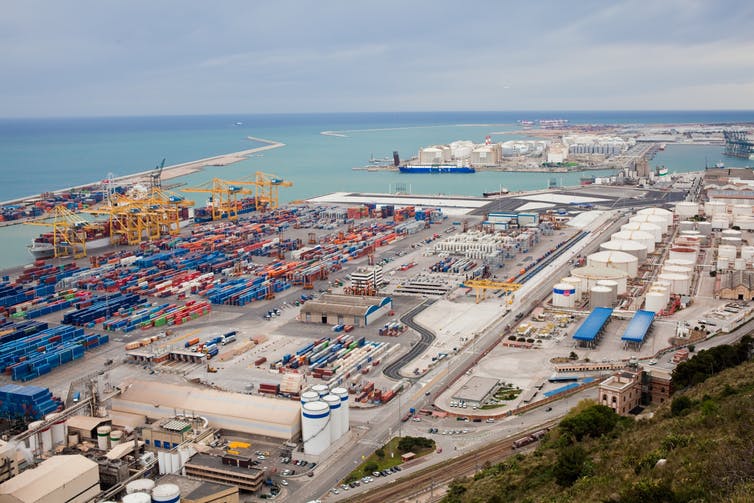 Spain as a whole is still suffering economically, following the financial crisis. While the Catalan government would agree that it should play a role in redistributing its wealth, there is a widespread feeling within the region that the central government has spent public funds on inefficient, politically-motivated infrastructure investments elsewhere.

Catalonia would of course need to invest in creating new state structures, such as embassies and a central bank. This may cost more than what Catalonia pays now as a proportion of the same structures for a larger state. Conversely, the new Spanish government could use the split as an opportunity to simplify its own administrative structures, as the preferences of the rest of the Spanish population would be more homogeneous without Catalonia.

Another issue is government debt. The new Spanish state and Catalonia would need to negotiate the allocation of joint assets and liabilities. Currently, most of the public debt in Spain is issued by the Spanish government. The Catalan government has a relatively small public debt of its own, on top of its proportional share of the Spanish government debt, which Catalonia would probably also need to take on as part of the split negotiation.

The Catalan government would probably need to seek funding from financial markets. This could be possible if it becomes an independent state which raises its own taxes. Although the new Spanish state may be in a worse financial situation than it currently is, it would retain the support of the European Central Bank.

In the short-run the split may be costly, as both sides may also face economic uncertainty and disruptions to trade, as their populations may boycott each other’s goods and services (as has happened at previous times of tension). Because of the size difference, Catalonia would end up suffering more from this (the rest of Spain accounts for one third of Catalan exports).

But it is unclear how long boycotts would last, and how restrictive they might be. Businesses may also search out other markets, as they have even in the recent past. Exports of Cava from Catalonia to other countries, for example, increased substantially following an informal boycott from the rest of Spain ten years ago.

A key factor is whether Catalonia could gain independence and remain in the EU. If Catalonia were to remain as part of the EU, not much would change for either side. If it were required to remain outside the EU for a period of time, it would need to negotiate trade agreements with the new Spanish state and the rest of the EU.

Despite the inevitable transition costs for both sides, there may also be some benefits to a split. The new Spanish state would lose a dynamic economy with better economic indicators than its average in terms of GDP, unemployment, exports and innovation. But this may trigger greater economic development and modernisation in its remaining regions. The new Spanish state may gain in the long run if the preferences of its citizens are more homogeneous and better aligned with the central government than at present.

Needless to say, prior to independence, both parties may have vested interests in using economic and non-economic threats against each other. After secession, however, mutually beneficial agreements would unavoidably be pursued. In any case, both new states are viable, and they could well be better off in the long run.