Although the Trump administration maintain that there is nothing wrong with the previous executive order, they issued a more thought out version that is less of a legal minefield

Although the Trump administration maintain that there is nothing wrong with the previous executive order, they issued a more thought out version that is less of a legal minefield

President Trump has signed a new executive order that will place a 90-day ban on entry for people from six countries, all majority Muslim. With one notable exception, Iraq – the home of ISIS, but also home to those who are fighting against the terror group.

It appears as though this time, qualified government lawyers – not just Stephen Miller and Steve Bannon – have had input. Of course it is still unclear how this will help prevent violet attacks on US soil, especially given that previous attacks have not involved individuals from any of the banned countries.

While it is not a sweeping Muslim ban like Trump called for on the campaign trail, his supporters will still likely be satisfied with the move. The directive includes a 120-day ban on all refugees, including those from Syria, taking effect on the 16th of March, and there is some irony in the delay:

Today’s ban was announced with a one week notice

The President of the United States is a complete moron. https://t.co/tDf4emRKPb

The White House hopes that this delay will help avoid some of the chaotic scenes at the airports that occurred when the first ban was implemented without warning.

The previous order was blocked by federal courts and led to protests around the country and caused confusion at airports nationwide. The new order was unveiled by Secretary of State Rex Tillerson, Attorney General Jeff Sessions and Department of Homeland Security Secretary John Kelly. 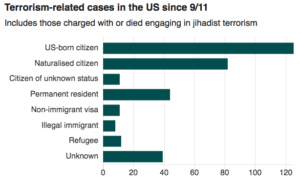 “The fact remains that we are not immune to terrorist threats and that our enemies often use our own freedoms and generosity against us,” said Mr Kelly.

Mr Sessions said that there are more than 300 refugees under investigation for potential terror offences, but no further details were given in this justification for the refugee ban.

America’s top US diplomat said the order was meant to “eliminate vulnerabilities that radical Islamic terrorists can and will exploit for destructive ends”.

Iraq’s removal comes after the Iraqi government had been lobbying for this at the highest level, including a phone call between President Trump and Iraqi Prime Minister Haider al-Abadi on February 10 and an in-person conversation between Abadi and Vice President Mike Pence in Munich on February 18.

Will there be legal challenges?

The short answer is yes. New York Attorney General Eric Schneiderman – the state’s highest ranking law enforcement officer – issued a statement on Monday saying his office is ready to take the Trump administration to court. “While the White House may have made changes to the ban, the intent to discriminate against Muslims remains clear,” he said.

“My office is closely reviewing the new executive order, and I stand ready to litigate – again – in order to protect New York’s families, institutions, and economy.”

The American-Arab Anti-Discrimination Committee (ADC), an Arab-American grassroots civil rights organisation, immediately called for donations to fight impending legal battles ahead. “The ban is about xenophobia and Islamophobia,” the group said in a statement to the BBC.