“Have you no sense of decency, sir?”

This is a famous quote from the 1950s and the McCarthy Hearings, but the quote resurfaced when said by billionaire investor Warren Buffett. In a speech against Trump in Omaha, Nebraska, Buffett said, “I ask Donald Trump: have you no sense of decency, sir?”

This quote brings up a real question: are Donald Trump and Joe McCarthy anything alike?

The Senator from Wisconsin 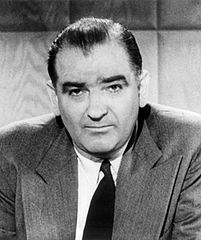 Joe McCarthy (1908-1957), was a Republican Senator from 1947 until his death in 1957. He became the public face of the communist witch hunt in America, which sought to identify and imprison anyone who may be associated with the communist party in America.

At the height of the Cold War, people were distrusting each other, afraid that their neighbors might be communist sympathizers and engage in attacks against America.

Swooping in to the rescue was Senator Joe McCarthy, who decided to hold public hearings to identify suspected communists.

Mr. McCarthy rose to national fame for his public accusations, and in 1950, he said he had a list of “Members of the Communist Party” who worked inside the State Department.

He then continued to publicly accuse people of being communists, and he also used his stage to conduct witch hunts against homosexuals, trying to embarrass them publicly in Senate hearings.

In 1954, McCarthy was censured by the Senate, and faded from the national headlines until his death, three years later.

Both Trump and McCarthy are provocateurs, they are known to act publicly in an attempt to get on the front page of the paper. They feed information to the media to bring great attention to themselves, building their reputations on the fears of the American people. With Trump, it is the fear of immigrants and terror; with McCarthy it was fear of the Russians and communism.

They are both highly divisive figures, preying on uncertainty, and trying to alienate those who are different.

In the end, McCarthyism was seen for what it truly was: a destructive road littered with the careers of those who got in McCarthy’s way, with no way to fight or pick up the pieces.

Trump is not there yet, but he is going down the same road. Hatred and fear is not what America is about, but looking at the polls, maybe it is.