LA to Uganda: Read the the Amazing Story of Rabbi Gershom Sizomu

LA to Uganda: Read the the Amazing Story of Rabbi Gershom Sizomu

Rabbi Gershom Sizomu eyes sparkle as he recalls his college years. A rabbinical student at  American Jewish University in the elite Bel Air neighborhood of Los Angeles, Sizomu enjoyed living in close proximity to movie stars. Like many of his classmates Sizomu was an eager student and keen to expand his understanding of Judaism. Yet, unlike his classmates when Sizomu graduated in 2007 he returned to the tropical hills of Mbale, Uganda. There he heads a small but, vibrant community of Jews known locally known as Abayudaya for “People of Judah”. The Abayudaya have lived for decades in Mbale a small community which sits below Mount Elgon, a table top peak that overlooks Uganda’s border with Kenya.
Uganda’s Jewish community was founded in 1917 when Semi Kakungulu a local tribal leader converted to Judaism.  Having read the bible through a Swahili translation, Kakungulu became intrigued by Isaiah 56:1-8 which promises rewards for those who keep the Sabbath Holy.  Upon conversion Kakungulu lead his follower into the foothills above Mbale to avoid persecution from the colonial authorities.  In 1920, a British Jew visited the area for six months and taught the group the rudiments of Jewish laws and customs. Sizomu is the group’s first leader to complete full rabbinical training.
Kakungulu may well have had political motivations for the conversion as well.  Kakungulu, who had fought for the British as a young man felt spurned when he was not made the ruler of Western Uganda under British protection. Kakungulu served as the community’s leader until his death in 1928.  Today, there are as many as 1,500 Ugandan Jewish spread across eight villages in the environs of Mbale.
Like their co-religionists elsewhere, this unique Jewish community has faced periods of persecution. In 1976, a stunning Israeli raid freed hostages held by the Palestine Liberation Organization at Entebbe Airport. In the aftermath, Uganda’s dictator Idi Amin took revenge on the Abayudaya community. Local administrators closed synagogues and banned Jewish religious gatherings. When a storm that year blew the roof off a synagogue, local Amin supporters attacked Jews who sought to simply to repair the facility.  Worse days were to come. In 1988, when the group prepared to open what is today its largest synagogue, local chiefs gathered to protest the construction and riot ensued. Today that synagogue is the heart of the Jewish community with a numerous Jewish families and a shalom grocery store nearby.
Yet, in recent years the community has received support from a number of global Jewish organizations despite. Yet, the community still lacked a Rabbi.  In 2002, a chance meeting lead Gershom Sizomu to be offered a scholarship to come to Los Angeles. “At that time my family and I were living in a place where you had to walk two miles to get water with a Jerry can, can you imagine our reaction when we got to Los Angeles and discovered we had a washing machine?” the Rabbi explains. After returning to Uganda six years ago he has maintained his links with Los Angeles and expanded his flock. His home now has running water.
Since his return he has reprioritized Hebrew instruction and launched a Yesheva. One of the first five graduates was a Ghanian Jew who has returned to his West African nation to become that country’s Jewish leader.
Many of the Abayudaya live in communities that equally mixed between Muslims, Jews and Christians a various denominations. Yet, Ugandans of all faiths love football and the sport has served as an interfaith bridge.
Since 2009 the Abayudaya Team has competed not only in the Independence Cup but, also the Christmas Cups and Eid Cup organized to recognize respective Muslim and Christian holidays. In 2012, the Abayudaya team lost on penalty kicks in the Eid Cup in 2013 the closest it has come to winning a tournament. Prizes for winning teams can range from a few goats to a car. The competitive performance of Jewish team many of whom lack football cleats earned the Jewish team the respect of the surrounding community.

Since then a few Muslims and Christians have joined the Abayudaya team.   “Some of the players of other faiths have shown their support for us by wearing kippahs during the matches.” One Jewish player explains with a smile.
The community continues to grow through mass conversion. In 2008 a group of 7th day Adventists converted en mass. Sizomu explains that, “In Africa mass conversions are still common in 2009 we saw a small conversion of 150 to Judaism. ” Abayaduya Jews are overwhelmingly farmers by trade focusing on maize, bananas and coffee. Coffee is nation’s second largest foreign revenue earner after the tourism industry and Sizomu has helped organize a coffee co-operative that includes Jewish, Muslim and Christian members.
Yet, financial issues continue plague the community. Uriah a 23 year old member of the Abayudaya  football team sits in the shade near the area’s synagogue and offers his take on the issues facing Ugandan Jews, “The number one concern isn’t religious freedom its creating economic jobs and health issues.”   After being amazed by the health services available in Los Angeles, Gershom opened the Tobin Medical Centre. The center focuses on Malaria treatment which each year Malaria kills 100,000 Ugandans.
After years of political quietism from Uganda’s Jewish community Gershom ran as an opposition candidate in Uganda’s 2011 parliamentary election and lost a close contest, claiming that hundreds of votes and that supporters were beaten. “That time the regime used dirty tricks on the day of the election. We will be ready next time.”
Yet, above all Gershom believes in self-help. He has worked to provide solar panels to rural areas that were off the electrical grid and has a plan to launch a faith-based microfinance scheme. In between politics and community organizing Gershom takes a moment to reflect in his office about life in Los Angeles compared to land-locked Uganda “I really did like going to Santa Monica beach with my family and taking them shopping in the mall on a nice day. Maybe I will go for a visit one day but, there is a lot of work still to do here.” 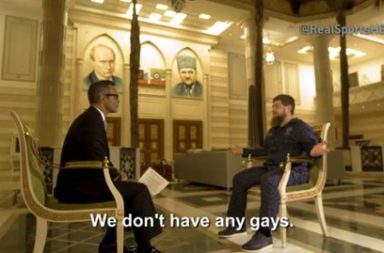 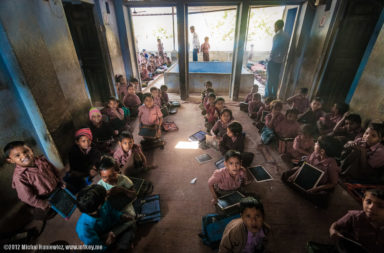 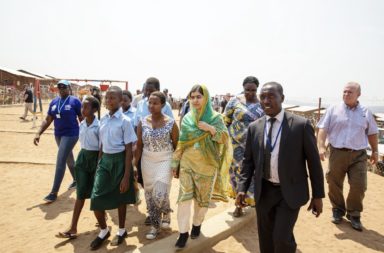