Why Market Competition Has Failed in Reducing Healthcare Costs

Why Market Competition Has Failed in Reducing Healthcare Costs

Whether the ACA remains in force or it’s replaced by something else, healthcare costs won't be under control until something like the single payer policy is in place

Whether the ACA remains in force or it’s replaced by something else, healthcare costs won't be under control until something like the single payer policy is in place

It is easier than ever to buy stuff. You can purchase almost anything on Amazon with a click, and it is only slightly harder to find a place to stay in a foreign city on Airbnb.

So why can’t we pay for health care the same way?

My research into the economics of health care suggests we should be able to do just that, but only if we say goodbye to our current system of private insurance – and the heavy administrative burden that goes along with it. Republican efforts to repeal the Affordable Care Act (ACA) would take us in the wrong direction.

What makes health care so complicated

In a way, the reason buying health care is different than shopping for a garden gnome or short-term apartment seems obvious. Picking the right doctor, for example, involves a lot more anxiety and uncertainty and concerns matters of life and death.

But that’s not really the reason we can’t purchase health care the same way we buy an iPhone. In 1969, this would almost be true (for a rotary phone anyway). Back then, the bill for a birth in a New Jersey hospital looked a lot like the receipt you’d get for buying pretty much anything else: customer name, amount and a box to be checked for payment by check, charge or money order.

Today, paying for even the simplest office visit can become a nightmare, requiring insurance preauthorization, reimbursements adjusted for in-network or out-of-network copays and deductibles and the physician “tier” (or how your prospective doctor is evaluated for cost and quality by the insurance company).

Prescriptions require even more authorizations, while follow-up care necessitates coordinated review – and it goes without saying that many forms will have to be completed. And this doesn’t end when you arrive at the doctor’s office. A large chunk of any visit is spent with a beleaguered nurse, or even the physician, filling out a required checklist of insurance-mandated questions.

The growing complexity of health care finance explains why it’s becoming more and more expensive even though there has been little or no improvement in quality. Since 1971, the share of our national income spent on health care has doubled.

We can blame a significant part of the soaring cost of health care on the ever-increasing burden of administrative complexity, whose cost has climbed at a pace of more than 10 percent a year since 1971 and now consumes over 4 percent of GDP, up from less than 1 percent back then. 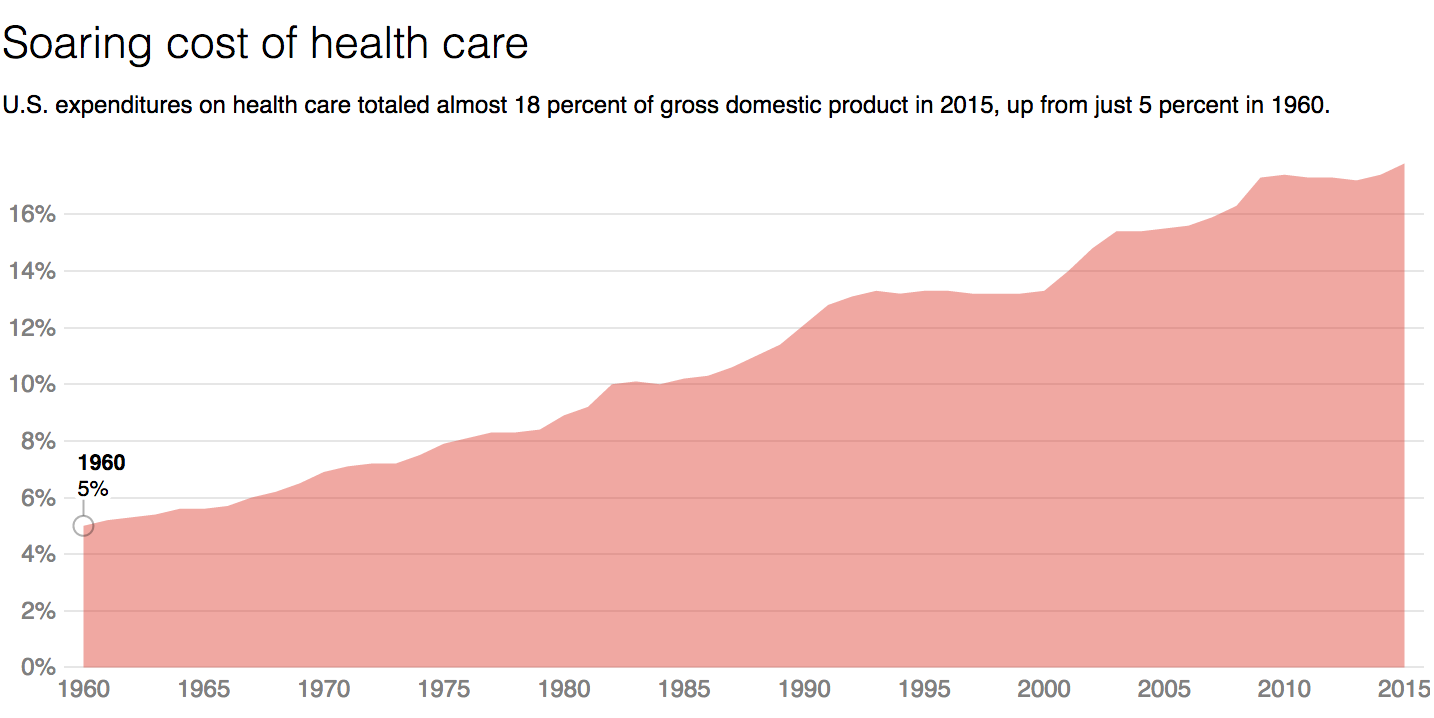 So if the rising cost of administration is a primary force driving health care inflation, why don’t we do something about it?

That’s because administrative complexity and waste are no accident but rather are baked into our private health insurance system and made worse by continuing attempts to use competitive market processes to achieve social ends other than maximizing profit.

Paying a doctor was relatively simple in the 1960s. Most people had the same insurance policy, issued by Blue Cross and Blue Shield, which back then was a private company but operated like a non-profit under strict regulation.

But in hopes of controlling steadily rising costs, policymakers encouraged insurers besides Blue Cross to enter health insurance markets, beginning with the HMO Act of 1973. The proliferation of for-profit companies with competing plans raised billing costs for health care providers, which now had to submit claims to a multitude of different insurers, each with its own codes, forms and regulations.

Not only that, but insurers quickly discovered the dirty secret of health care finance: Sick people are expensive and make up most costs, while healthy people are profitable.

In other words, the vital lesson for an insurer looking to make money is to identify the few sick people and get them to go away (“lemon dropping”) and find the healthy majority and do things that attract them to your plan (“cherry picking”).

Insurers are happy to offer discounts on fitness club memberships to attract healthy people, for example. But they punish the sick with higher copays and deductibles, as well as increasingly restrictive and intrusive regulations on preauthorization.

It’s time to take a step back

Clearly, our experiment in market-driven health care has gone awry.

Before we introduced competition and deregulation into health care, things were relatively simple, with most revenue going to providers. We could save a lot of money if we went backwards and adopted a single-payer system like Canada’s, where insurers do not engage in systematic preauthorization or utilization review and hospitals and pharmaceutical companies do not form monopolies to profit at the expense of the public.

Largely by reducing administrative costs within the insurance industry and to providers, a single-payer program could save enough money to provide health care to all Americans.

So whether the ACA remains in force or it’s replaced by something else, I believe we won’t be able to control health costs – and make health care affordable for all Americans – until we revamp the system with something like single payer.