The Kremlin brags that its murderous military has been using the conflict in Syria as a testing ground, with civilians as the guinea pigs

The Kremlin brags that its murderous military has been using the conflict in Syria as a testing ground, with civilians as the guinea pigs

Only 10 weapons systems performed below expectations, he added. Russia has never made secret its intervention on behalf of the Syrian regime was a perfect opportunity to demonstrate to the world its military capabilities. After Russia entered the conflict in 2015, the navy fired cruise missiles at Syrian targets some 900 miles away – on Vladimir Putin’s 63rd birthday no less.

The air force sent long rage bombers on frequent round trips from bases within Russia, and the country’s only aircraft carrier, the Admiral Kuznetsov, journeyed from the Arctic Ocean to the Syrian coast in order to facilitate airstrikes.

“There were two main goals: to force the West to talk with Russia and break the isolation from the Ukrainian crisis, and secondly, to support Syrian President Bashar Assad,” said Aleksandr Golts, a fellow at the Kennan Institute in Washington.

Golts went on to add that trying out new arms was just a bonus, and that cynically speaking, the best way for any military to test its range of weaponry is at war. 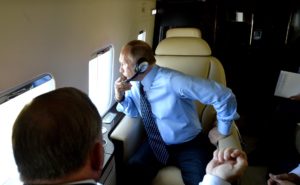 The fall of the Soviet Union in 1991 left many Russians feeling humiliated, with their country losing its superpower status. Russia was relegated to the sidelines, forced to watch as the United States led the military interventions in Yugoslavia and Iraq. So Putin made it a priority to modernise the military and put Russia back on the map as a global player on the world stage.

The Russian military’s performance in the Syrian war has sent a signal to its own citizens and the rest of the world that they are capable of putting together an expeditionary force, even far away from their borders. In launching the cruise missiles, Russia showed that it could potentially reach targets deep within Europe.

“By American standards, it was a small operation. But it was more than the experts thought they were capable of,” said Dmitry Gorenburg, a defence analyst with the CNA think tank in Arlington, Virginia.

The civilians on the ground pay the price

Although Russia is celebrating their recent air prowess, human rights groups unanimously say that it has come at an unacceptable cost for civilians on the ground.

“Every statement we’ve sent to the Russians about a strike and questioning the legitimacy of the strike has been met with denials. But that doesn’t change what the obligations are,” said Lama Fakih, deputy director for the Middle East and North Africa at Human Rights Watch.

Laws of war were violated, and Russia is obligated under international law to conduct investigations and pay compensation to survivors, but many are sceptical this will even be addressed. Their campaign in Syria is well documented, hitting hospitals and schools, with no regard for human life.

“The U.S.-led coalition does publish information on a monthly basis about strikes they’ve investigated. We aren’t seeing the same level of transparency from the Russian defence ministry,” Fakih said.

“My sense is that they didn’t care that much – certainly not compared to how much Western countries’ militaries care about collateral damage and civilian casualties,” Gorenburg said.

The Russian government firmly denies all reports by Human Rights watch and other groups, citing an “information war” against Moscow. Likely reports covering the topic will be labelled as fake news.

Russian military thinking has not changed since the Kremlin crushed a rebellion in Chechnya 17 years ago, right when Putin was rising to power.