THIS IS THE WILL OF OSAMA BIN LADEN

THIS IS THE WILL OF OSAMA BIN LADEN

He was a millionaire

He was a millionaire

The Office of the Director National Intelligence of the United States released the will of Osama bin Laden. Here the official text:

Osama bin Laden’s handwritten will left millions for jihad. But even in the period shortly before his death, bin Laden placed the utmost importance on portraying his fraying organization as a united enterprise—while his lieutenants privately wrestled with their growing schism from al- Qa’ida in Iraq. As the tenth anniversary of the 9/11 attacks approached, bin Laden envisioned a worldwide media campaign, suggesting his media team work with specific news outlets.

This emergent portrait of bin Laden comes together today via documents from the Office of the Director of National Intelligence released in the second batch of media recovered during the 2011 raid in Abbottabad, Pakistan, at the compound used to hide Osama bin Laden. 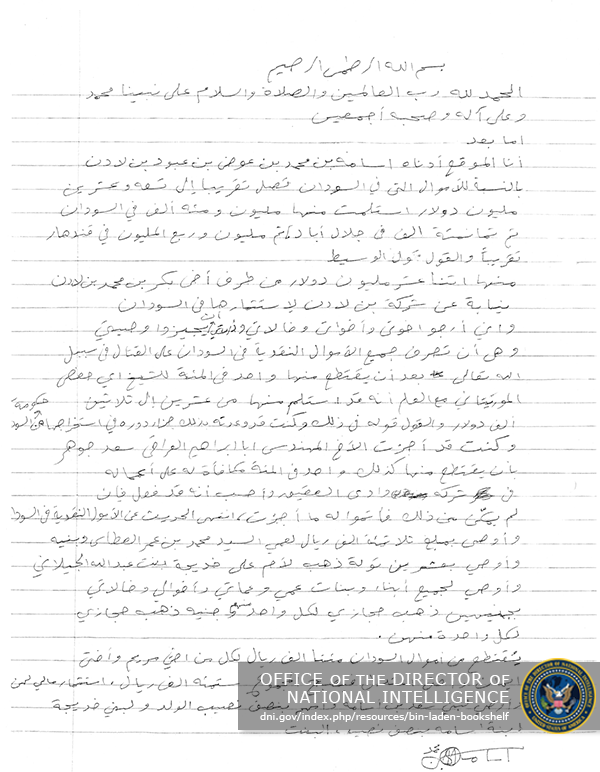 The release aligns with the president’s call for increased transparency—consistent with national security prerogatives—and the 2014 Intelligence Authorization Act, which required the ODNI to conduct a review of the documents for release.
Beginning last summer and with DNI approval, the CIA spearheaded a rigorous interagency review of the classified documents under the auspices of the White House’s National Security Council staff. Representatives from seven agencies combed through the documents—with the goals of increasing transparency and responding to the congressionally-directed action.

“It’s important that the documents collected at bin Laden’s compound be made available to the public. This was no easy feat as members of the task force dedicated themselves over a long period of time working in an Intelligence Community facility to review and declassify as many documents as possible,” said Brian Hale, ODNI Director of Public Affairs.

Given the large number of documents to review, and the increasing public demand to see them, the White House asked ODNI to declassify and release the documents as they were ready. This is the second tranche to be released. The first tranche was released May 20, 2015. This initial posting contained two sections, a list of non-classified, English-language material found in and around the compound and a selection of now-declassified documents.

Those documents, as well as the additional declassified material released today, reflect on a range of topics, including reporting fissures between AQ and AQ in Iraq and bin Laden’s concern about AQ’s public image—and his desire to depict AQ as a united organization.

Since the first release, the Intelligence Community has reviewed hundreds of additional documents for possible declassification and release. The document-review process can be time consuming because—once a document is declassified—it cannot be reclassified. The IC needs to ensure no declassified document will directly injure efforts to keep the nation secure. With that in mind, the review is ongoing, with the next release expected later this year.