' I fought against extremism, violence and racism in Israel'

' I fought against extremism, violence and racism in Israel'

Moshe Ya’alon, the moderate defense minister of Israel since 2013, has resigned, citing severe disagreements with Prime Minister Netanyahu about the political fundament of the policy of the State of Israel and the soul of the first Jewish state.

Which is best described by famous Hillel the Elder in one sentence: “That which is hateful to you, do not do to your fellow. That is the whole Torah; the rest is the explanation; go and learn!” (Sabbat 31a)

GLOBALO documents his bitter resignation letter below, in which he wrote:

“I FOUGHT WITH ALL MY MIGHT AGAINST THE EFFECTS OF EXTREMISM, VIOLENCE AND RACISM IN ISRAELI SOCIETY.”

This shows again the main problem of the narrow-minded and nationalistic Netanyahu government, which is missing a clear long-term peace strategy as a combination of hawk and dove, uzi and olive branch, as described by GLOBALO founder Hubertus Hoffmann after a meeting with President Shimon Peres in Jerusalem: “In the next one hundred years, Israel will only be able to survive in its historic location, surrounded by a numerically superior enemy rich with petrodollars, frustrated Palestinians and radical fighter, when it places reconciliation with its Arab neighbors as “conditio sine qua non” of a genuine Israeli peace policy, and supports reconciliation with just as much energy, imagination, patience, and money as the necessary but insufficient military operations against terrorists.”

Netanyahu now wants Avigdor Lieberman as his defense minister. A radical settler from the West Bank with no senior military know-how in control of the IDF, which controls the West Bank.

Both want no peace-talks and a Great Israel including the West Bank, dispelling as many frustrated Palestinians as possible with many small discriminations, and more and more Jewish settlements there and in Jerusalem. Contrary to international law and the logic of peace-making, as learned in Europe after two bitter wars of former arch enemies as well as by the UK in Northern Ireland. Many in the Israel forces and intelligence services see this nationalistic policy of Netanyahu as the number two threat for the survival of Israel.

The beginning of the end of an open, pluralistic and tolerant society and the true art of peacemaking.

Is Israel now following the dead-end-road way of South Africa and copy-cat the failed, anti-democratic and anti-UN-human-rights Apartheit ?

Moshe Ya’aln  has been outspoken about “extremist” views taking over the government of Israel, and he has chose to step aside for the time being. But he has not sworn off public office, as he said, “in the future I will return to compete for the national leadership of Israel”.

Prime Minister Netanyahu is looking to replace Ya’alon with Avigdor Lieberman, who is a well-known hardliner who is closely aligned with the Prime Minister. His appointment has not been confirmed, but given the leanings of the government right now, a confirmation is likely. Avigdor Lieberman is a true story of coming from the bottom to the top: he started his career as a nightclub bouncer. He and his family immigrated to Israel from the Soviet Union in 1978, and Avigdor served in the IDF before going to Hebrew University of Jerusalem with a major in International Relations and Political Science, and this is where he worked as a nightclub bouncer. He was a member of the Likud party until he resigned from the party in 1997 citing concessions made by Netanyahu with the Palestinians in the Wye River Memorandum. He then formed the Yisrael Beiteinu party: a party for Soviet Jews who were hard-line against the Palestinians. His party has always been very vocally against any deals with the Palestinians, and he has resigned in the past due to concessions.

This marks a pretty big shift in Israel, as Ya’alon was seen as a very center-left member of the cabinet that helped to balance the direction of the leadership. With his replacement there can be no doubt that the government is leaning more toward the right. After a tough election, coming right down to the wire (a coalition was formed just 2 hours before the deadline), this abrupt positional change came as a surprise to many. The world eagerly awaits to see the new policies that will be in place for Israel. But with ISIS at the gates, the Prime Minister seems to want to make sure that everyone is on the same page in Israel. But are they? Reactions seem to be mixed around the world:

I'm sure Defense Minister Avigdor Lieberman will help in a new era of peace.

*chokes on own vomit*

@haivri How is the Appointment of Avigdor Lieberman being received in Israel? I am quite Excited myself.. Israel needs a strong DM right now

The tweet says: “Message to Israel that following its recent developments, and lack of trust, I am resigning from the Government and Knesset, and taking a break from political life.”

Who was Moshe Ya’alon?

He posted his announcement on Facebook, which is translated below: 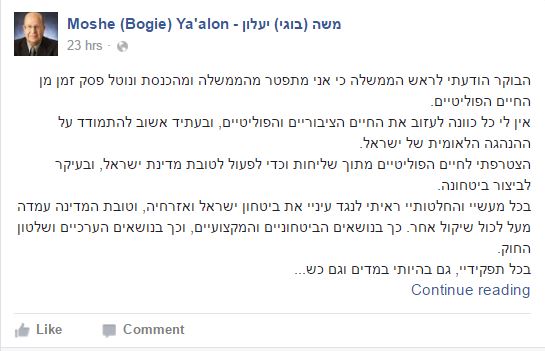