UK Election: What Happens Next?

UK Election: What Happens Next?

Now that the election is over and the Conservative Party did not will a full majority.. Theresa May's leadership is being called into question as next steps are pondered...

Now that the election is over and the Conservative Party did not will a full majority.. Theresa May's leadership is being called into question as next steps are pondered...

Theresa May’s Conservative party has failed to win a majority in a snap election she called, leaving the UK with a hung parliament and no clear route to a government. When an exit poll correctly signalled the result as polls closed, the pound fell on international markets.

But what does a hung parliament or a minority government actually mean for the UK?

Before we look at the arithmetic, the first thing to say, perhaps, is that despite the fear of instability in the coming days and weeks, the hung parliament represents the divided nature of the British electorate. The Brexit referendum split the country down the middle, and all of the resultant fallout means that the picture is complex. The fact that this complexity has been reflected in this vote should not be seen as a problem. It’s a snapshot of the true political position in the UK.

So then, what about the numbers, and what lies ahead? The Conservatives, as projected, are the largest party, winning 319 seats in the House of Commons. However, with a total number of 650 seats available, they are short of the 326 needed for a majority. 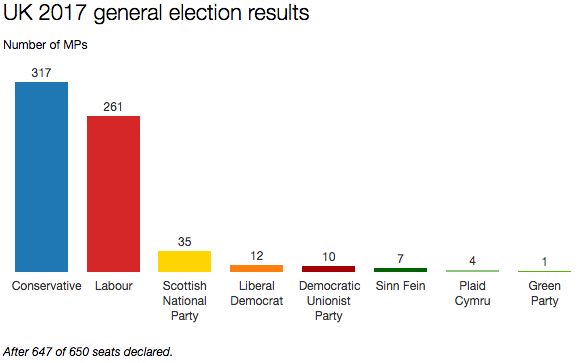 The pro-Brexit UK Independence Party vote collapsed, leaving the party with no seats, so the only real option for the Conservatives is to work with Northern Ireland’s Democratic Unionist Party (DUP). The latter has ten seats, so a deal with the Conservatives would result in a government with a very slim majority for parliamentary votes.

But if they take this route it would take an iron discipline within the Conservative party to put together and pass a legislative programme for the next five years. Just a couple of dissenting voices (quite the norm in parliamentary politics) would mean losing votes in the Commons.

With the UK facing the most difficult set of negotiations it has faced in several generations in dealing with Brexit, a minority government propped up by the Ulster Unionists would be an unenviable position to be in.

On top of this, there will now probably also be an internal wrangle in the Tory party over who might replace May as leader and prime minister. Because make no mistake, her miscalculation in calling the snap election ranks as one of the biggest political misjudgements we have ever seen in British politics.

But May could insist on staying on as leader: after all, she has shown herself to be utterly inflexible during her campaign. Remaining, though, would undermine the party and government even more. Can a country so divided be led by a damaged political figure?

Meanwhile, despite being written off as the inevitable loser in this election, Jeremy Corbyn’s Labour party has increased its share of the vote by 10%, and has won more than 30 extra seats, taking its total to 261. This is well short of the Conservatives, and well short of winning a majority but it’s a huge victory nonetheless. Remember that May called the election precisely because the polls were telling everyone that the Labour vote stood to collapse to a historic low.

In the end, the reverse happened, and Labour is back in the game. In terms of what the party can do in the next parliament, if a deal between the Conservatives and the DUP were to fail to materialise, the Labour party could try to put a coalition of the left together. However, even with all parties on board, it would still only be able to form a minority government, which would have even more difficulty than the Tories in putting together a legislative programme.

It’s difficult to see how any of the options above could survive a full term, and that means one thing: yet another general election, perhaps as soon as within the next 12 months. The turnaround in this election might well represent a groundswell among the electorate for a different approach to politics than the one taken by both main parties since the financial crash of 2008. Corbyn and Labour tapped into this over the past six weeks, and in a very short time, turned this election on its head. With another 12 months to nurture this sentiment, who knows what they could do.