Thousands take to the streets as parliament says the Venezuelan government breached its own constitution by blocking a referendum to oust President Nicolás Maduro.

The Venezuelan congress is now in open rebellion after a majority of its members voted that a decision against impeaching President Maduro constituted a coup with government participation. Lawmakers have announced they plan to push for impeachment proceedings against Venezuelan President Nicolás Maduro as chaos engulfs the streets.

“We will bring a political trial against President Nicolás Maduro to get to the bottom of his role in the break with democracy and human rights here,”opposition leader Julio Borges said.

Angry citizens have flooded the streets of Venezulea following the call for a nationwide protest on Wednesday dubbed “the taking of Venezuela” in which one policeman has already been shot dead and scores injured.

Using the hashtag #TomadeVenezuela or “Venezuela takeover”, people have shared images and video of the huge protests rocking major cities and decrying the violent and incompetent regime.

It seems as if the Venezuelan pressure cooker is finally about to explode.

For ordinary Venezuelans, it seems that legal recourse to Maduro’s regime has been met at every turn by violence, sabotage and political maneuvering from the highest level.  Attempts to block a referendum on Maduro’s rule have proved to be the final straw for many and hundreds of thousands of protesters are bringing  major cities Carcaras and Maracaibo to a standstill.

Calling for “the taking of Venezuela” in form of huge protests that have already turned violent, the opposition are riding a wave of dissatisfaction with a leader that is commonly regarded as weak, uncharismatic and corrupt by a clear majority of citizens.

Who will the military support?

Overshadowing the protests and recent violence is the open question of what the military will do and if they will open fire on Venezuelan citizens in defence of Maduro.

It looks like they may be forced to take a side in an increasingly volatile and dangerous climate and, as yet, nobody really knows where their true feelings lie.

Another pressing question is the response from the armed mafias that Maduro allegedly courted to keep order in Venezuela. They won’t be happy about losing a big revenue source and could prove vital in the war for Venezuela. 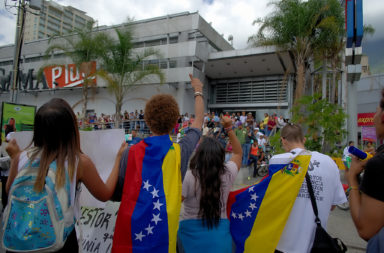