Venezuela has been the stage of a humanitarian tragedy that has been escalating quickly in the last months. With shortages of food, medicines, water and a huge electricity crisis deteriorating the life of the Venezuelans, the government of Mr. Nicolas Maduro breathes with difficulty and apparently does not have the medicine needed to remain alive. The “chavismo” initiated by Mr. Maduro´s mentor, Hugo Chavez, gathered a great base of support by trying to heal one of the biggest wounds of Latin America: the rising and wide inequality. With social transfer programs and a discourse of fighting the profit-hungry elites and multinationals, Mr. Chavez initiated a populist wave in the country that lasted until his death in 2013.

With the financial crisis exposing a decade-long clumsiness with the economy, associated with the clear lack of leadership capacity of president Maduro to deal with these challenges, the light at the end of the tunnel does not seem to be anywhere close. Earlier this month, Mr. Maduro declared state of emergency to deal with the crisis, granting himself the power to instruct the army to supervise the production and distribution of food. With the dissatisfaction on the streets on the rise, he threatened to call for a “state of internal commotion”, which, in practice, would allow him to impose a military rule across the country.

“Deeply concerned by the lack of medicines and medical supplies. Venezuelans are suffering and dying as an effect of the enormous crisis” says an opposition leader, Leopoldo Lopez.

While inflation reaches toward 700 percent and murder rates stay among the world´s highest, the high levels of social instability suggests that no action coming from Mr. Maduro´s rule seems enough to start scratching the country´s deep problems.


Running against the clock

The social mobilization intensified over the last weeks to call for a referendum on the maintenance of Mr. Maduro in office. Although assured by the constitution, the government pledges that the referendum is optional and that there is no time to hold a consultation this year. The opposition coalition (MUD) called for street protests to pressure the National Electoral Board to process the petitions for holding a referendum.

If the referendum is voted until January 10, 2017, a new election (which could take the „chavismo“ out of power after more than a decade) can be called. If the referendum happens after that, Mr. Maduro can hand power to his vice-president until the end of his term in 2019, which would not change much. The Electoral Board, such as the Supreme Court, has been favoring Mr. Maduro despite the fact of being supposedly independent. Together with the military support, the president is managing to hold his seat despite of the socio-economic chaos.


Blame it on imperialism

Mr. Maduro broadcasts constantly and repeatedly his accusations that the movement to call for a referendum is somehow orchestrated by the United States as a way to take him out of office. It is clear that Venezuela is facing economic problems mainly given the fall on oil prices, but the incapacity to conduct reforms and diversify the economy is the major cause of the chaos that the country currently goes through – confirmed by the very fact that no other country dependent on oil exports in the world is facing a crisis as severe as the Venezuelan one.

Over the last decades, Venezuela has been suffering from the Dutch disease, with the (back then) profitable oil sector succeeding over other sectors of the economy. Without a diversified industry, Venezuela relied mainly upon imports to address the food and medicine demand. Amidst a severe exchange crisis, the shortages became a reality very quickly, escalating to the social tension currently in place.

While Hugo Chavez acknowledged this situation and tried to diversify the economy, Mr. Maduro was incapable to deliver a credible monetary policy exchange rate reforms back in 2013 or 2014. Even being right about the American feelings towards the Venezuelan government, the Obama administration has no interest in engaging in an open conflict with the country. By blaming on a conspiracy and preparing the army for an eventual invasion of the US, Mr. Maduro aims to distract the attention to the fact that he was – and still is – incapable to provide the country with the solutions it needed.

Recently, the Organization of American States (OAS) declared that they would invoke the democratic charter of the bloc to suspend Venezuela from participating on the meetings based on the breach of democratic principles in the country. Mr. Maduro’s supporters went protesting in many different cities, blaming the organization to be an imperialistic tool from the US.

With Mr. Maduro senselessly denying humanitarian aid to tackle the food and medicine shortages, the situation in Venezuela might soon become a threat to regional stability. In such a scenario, the first action of the acting foreign Minister of Brazil under the interim presidency of Mr. Michel Temer was to define the regional agenda with the Argentinian administration of President Macri. Both stated their concerns about the situation in Venezuela and agreed to join forces to mediate the tensions in the country.

Mr. Jose Serra in his first official visit to Argentina as the Brazilian Foreign Minister. One of the main topics of the meeting was the situation in Venezuela.

However, both the post-impeachment government in Brazil and the recently elected government in Argentina are openly against Mr. Maduro and allied to the oppositionist front MUD, which would not only make impossible for both countries to mediate the situation, but also reinforce Mr. Maduro´s thesis of  an external „imperialist“ interference in the country.


How much worse can it get?

While the tense political standoff between the legislative and executive branches confirms that democracy has long been gone in the country,  Mr. Maduro seems to rely only on biased institutions and the army support to remain in power. Without any feasible solution in the near term, the president is trying to postpone as long as he can a possible referendum in order to, if necessary, hand power to his vice-president and remain with some kind of control to the situation. With political elites being unable to look beyond short term political gains, the population asks themselves how much worse this situation can get before it starts getting better. 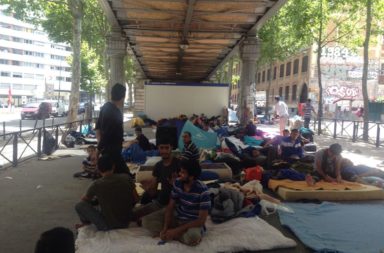