How the Polls Favor Hillary

How the Polls Favor Hillary

But only if she keep her leads in Florida, Michigan and Pennsylvania - Ohio and New Hampshire for Trump

But only if she keep her leads in Florida, Michigan and Pennsylvania - Ohio and New Hampshire for Trump

As Election Day is now right around the corner, voters have largely made their minds up and now the polls are telling a clear story. Hillary Clinton has a 98 percent chance of winning, according to the latest polls.

Trump came close in recent days in the wake of the FBI’s reopening of the investigation looking into Clinton’s email scandal.

Over the last few days of the race, Trump intends to travel all over the country. He’s going to Florida, North Carolina, Nevada, Colorado, Iowa, Michigan, Wisconsin, Pennsylvania, New Hampshire and even Minnesota, he said Saturday.

It’s an impressive travel schedule, but it may reflect the biggest challenge facing him right now: It’s still not clear exactly where and how he would win.

Trump trails Clinton and would need 106 more projected electoral votes, whereas Clinton needs 54 to win. This is still quite a dominant lead, however it’s solidity has been fading ever so slightly.

There is less than one week before the election, on November 8th, 2016.

This is the latest nation wide polling data from nine sources: 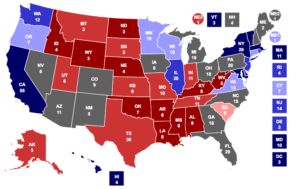 The polls are close enough that the possibility of a victory for Trump is still quite real. But it’s just not clear exactly how or where he would break through. It doesn’t seem that the Trump campaign knows either.