In a new review paper in the journal Science Advances, they call into question a cornerstone of development aid: the “poverty trap” and its “big push” solution.

The poverty trap is a concept widely used to describe situations in which poverty persists under a certain asset threshold through self-maintaining mechanisms. In other words, it’s the vicious cycle of poverty, where the poor get poorer because they cannot accumulate savings or have enough energy to work.

The term, which was used by both Jeffrey Sachs and Paul Collier in 2005 to describe households or countries stuck in low-levels of economic well-being, was central to the UN’s Millennium Development Goals.

Trapped in our thinking

The “big push” – one of the earliest theories of development economics – is a still-popular one-size-fits-all approach to alleviating poverty at community and household levels, despite its known limitations. The basic idea of this theory is that it takes a big coordinated push of investment to allow economies to take off beyond a critical point (as defined by the poverty trap).

The two concepts, as you can see, go hand in hand.

But there’s an issue: though the poverty trap is a prominent way to conceptualise persistent poverty, its strictly economic view of poverty has thus far ignored the roles of nature and culture.

With 78% of the world’s poorest people living in rural areas, development aid is often targeted at financial and technological farming solutions. Development agencies encourage farmers to grow single cash crops, or monocultures, such as genetically modified cotton in India, that they can sell to rise out of poverty.

This strategy has had mixed results and, in some cases, serious ecological and social consequences that can reinforce poverty.

In the paper, they provide a way to extend poverty-trap thinking to more fully include the links between financial well-being, nature and culture.

The first is the so-called standard “big push”, to tip countries “over the barrier” so they have better-functioning economies. The second is to lower the barrier. And this could include everything from training farmers to changing behaviour and practices.

These two classifications form the backbone of current aid strategies.

But they introduce a third classification, which they call transforming the system, with the goal of rethinking the traditional intervention strategy.

Using theoretical multi-dimensional models of different relationships between poverty and the environment at the household or community levels, they tested the effectiveness of these poverty alleviation strategies.

For example, a popular and empirically supported narrative is that poor people degrade their environment, but less well-known empirical evidence shows how poor people do not disproportionately deteriorate the environment. They are often stewards of nature and create and maintain features such as agricultural biodiversity.

Take for example, the Pamir Mountains of Tajikistan and Afghanistan, which are characterised by high biological and cultural (aka biocultural) diversity. In a context like this, people may be poor in monetary terms but care for an incredible diversity of agricultural crops with their rich ecological knowledge and cultural practices.

And the diversity of traditional seeds may, in turn, help make them resilient at a regional level to shocks.

In such places, the conventional push “over the barrier” to increase food production (through improved seeds or fertilisers) may risk losing biodiversity or traditional knowledge.

Their models show how a transformation strategy in which endogenous actions change the status quo could in some contexts alleviate poverty without serious consequences for nature and culture. This possibility creates space for currently underrepresented narratives of development, such as agro-ecology or food sovereignty.

The results of the models show that conventional development interventions that ignore nature and culture can reinforce poverty; transformative change may be necessary in those contexts; and asset inputs may be effective in others.

These results are synthesised in the “poverty cube”, which shows how they brought together the multi-dimensionality of poverty, different intervention pathways and diverse contexts. 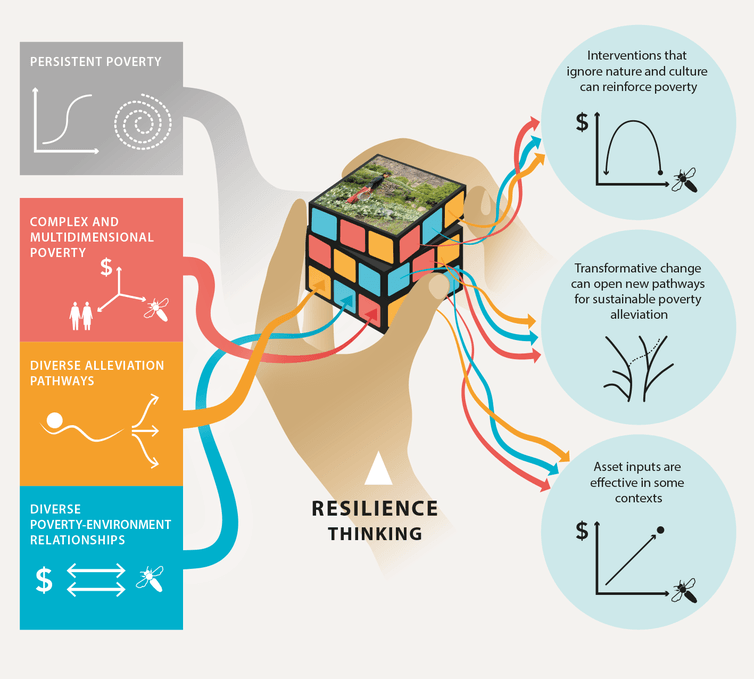 This approach to poverty traps may be useful for people in the development field to think through the implications of diverse development trajectories. Prior to our multi-dimensional poverty cube, poverty-trap models usually considered only the monetary dimension of being poor.

The paper emerged from a number of years of collaboration between a theoretical physicist, sustainability scientists, and an economist. It involved a highly interdisciplinary research approach.

The importance of biophysical and cultural settings for poverty alleviation has long been understood. But interventions continue to be designed based on the poverty trap, a concept that usually neglects these factors.

The poverty cube could help donor agencies better integrate poverty, environment and culture in their thinking and development planning. Integrating these factors will be a major challenge for the Sustainable Development Goals.

What we need to do next is dig deeper into understanding how this type of dynamic multidimensional modelling can be used in place-based studies aimed at communities.