In Geneva on last Friday, the US and Russia finally made a deal after months of negotiations on Syria.

They agreed upon a seven day ceasefire, which would allow humanitarian aid to have total access to areas ravaged by conflict, like Aleppo.

Russia is the biggest supporter of the ceasefire, and after supporting Syrian president Bashar al-Assad for the past year, they have now agreed to hold back strikes on rebel communities if they will separate themselves from jihadists.

Al-Assad supports the ceasefire and said that Syria is “determined to recover every area from the terrorists, and to rebuild.”

Is the ceasefire preventing violence? 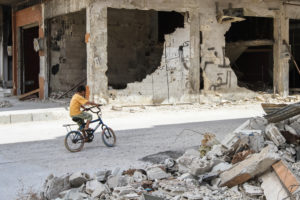 Secretary of State John Kerry said that despite reports of violence, it is “far too early to draw definitive conclusions” on the effectiveness of the ceasefire. He said, “There will be undoubtedly be reports of violations here and there and that’s the nature of ceasefires. For all the doubts that exist, and there will be many challenges in the days to come, despite that, this plan has a chance to work.”

What will happen if the ceasefire is successful?

The Syrian conflict has been going on for five years now, causing the deaths of between 250,000-400,000 people and 4.8 million have fled the area as refugees.