A chilling statement has been going around for decades – “environmental problems- our children will figure them out”. Young Dutch environmentalist Boyan Slat now cries, “Here I am!”

Boyan Slat has researched since the age of sixteen and customised technology that can be used to challenge global issues such as plastic pollution in the oceans. This is done with the prime focus on sustainability. The Ocean Cleanup is the brain child of this entrepreneur. He has been renowned as one of the twenty Most Promising Young Entrepreneurs Worldwide, and was crowned Champion of the Earth in 2014, the highest environmental accolade given by the United Nations’. In 2015, Boyan was awarded the maritime industry’s Young Entrepreneur Award  by the hands of  His Majesty King Harald of Norway, and was also listed in the Foreign Policy magazine’s  list of Global Thinkers.

We live in what one can call the “plastic age”.

Last year, it was recorded that a whopping eight million tons of plastic enters the ocean annually . Different portions of this gather in five large areas known as the gyres, where the currents converge. Millions of sea-birds and hundreds of thousands marine mammals die each year mainly because of plastic pollution. This could endanger the lives of over a hundred species and threaten native eco systems. Plastic adsorbs PCBs ,DDTs among many other chemical toxins. The smaller particles of such plastic are ingested by the fish, thus having humans consume high concentration of pollutants in food. The consumption of these substances is closely linked with illnesses such as cancer, problems with pregnancies as well as malformation.

Boyan stood on a stage in Delft in Netherlands and presented his idea on how to get rid of plastic from the ocean. He studied the problem and tried to figure out why is it so hard to clean up this plastic. During his intensive research he found that over thousand miles off-shore, in the middle of the ocean you can find six times more plastic than plankton on an average. He was astounded by the fact that the people involved in this area had not investigated it enough before pronouncing it as “impossible”. Prevention of plastic reaching the ocean is important but not a solution for the plastic that already exists. A cleanup is long overdue; the removal of plastic from the five concentrated areas is the first undertaking. There is now a procedure to reduce the economical, ecological and health issues in these regions – a feasible solution.

What is the solution proposed?

Along with his colleagues at The Ocean Cleanup, Boyan Slat is developing The Ocean Cleanup Array, a network of floating barriers that can extract plastic for recycling. This is how it will work: 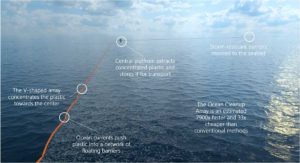 A third of the 5.25 trillion bits of plastic (existing in the ocean), is concentrated in the Great Pacific Garbage Patch. An Ocean Cleanup Array can clean up half the Great Pacific Garbage Patch in a decade. It is a massive challenge though; the concentration of plastic in the five gyres is spread out over many million square kilometres. Hence, one could estimate a total of 79 thousand years and billions of dollars to clean just one area. But Boyan asked a simple question, “why go through the oceans, when the oceans can go through you?”. As an alternative he suggested waiting for the plastic to accumulate on its own without using any additional energy. He devised a system which is driven by the ocean currents which would cause the plastic to concentrate itself, decreasing the speculative cleanup time from an era to a few years.

Boyan Slat has been the talk of many tables as he has been successful at proving the feasibility of his idea and announcing globally the launch of “Ocean Cleanup Projects”.- which comprises of a 60 kilometre-wide net and a boom system that captures drifting plastic. With the support of a crowd he remains undeterred, even though he has been criticised by the scientific community on his mechanical design and ecological impact. An expedition with 30 vessels was completed across the North Pacific, titled as the Mega Expedition. It has announced the deployment of a hundred metre long barrier segmented in the latter half of this year in the North Sea. About twenty three kilometres off the coast of Netherlands, it will be the first time the design will be put to test in open waters. The North Sea test will help ensure the efficiency and resilience once the all-encompassing system will be deployed in the Great Pacific Garbage Patch in 2020.

Boyan Slat is leading the way in an extremely original way, and his novel plastic clearing technology should be lapped up by sustainable political leaders around the world. 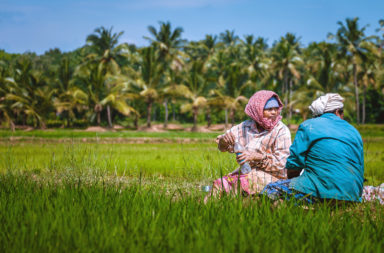