Among the Ruins of Aleppo Springs of Hope Emerge

Among the Ruins of Aleppo Springs of Hope Emerge

In the besieged city, the focal point for much of the world’s ire regarding the Syrian Civil War, the fighting has stopped. Amid the sudden calm, those who remain in Aleppo pursue a semblance of normality.

In the besieged city, the focal point for much of the world’s ire regarding the Syrian Civil War, the fighting has stopped. Amid the sudden calm, those who remain in Aleppo pursue a semblance of normality.

After 5 years of intense fighting, bombing and slaughter, Aleppo lies in the control of the Syrian Government. The once great city has lost thousands to displacement and death. Tragically, Aleppo is almost unrecognisable to those fortunate to see it before the bombardment. Yet in the eerie calm of the detente Aleppans are attempting to live again, in the face of horrific obstacles.

Once considered only second in prominence to Constantinople (modern-day Istanbul) in the Ottoman Era, it was nicknamed Aleppo al Shabaa, or Aleppo the White. This was in light of the famed brightness of the marble used in its buildings. It was a significant hub on the ancient Silk Road, contributing to the development of civilisation in the region. 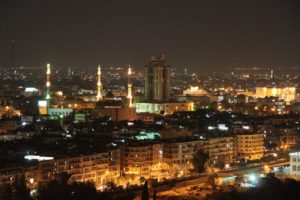 Allepans are proud of their city’s heritage. “Our identity was Aleppo, and we were unique in Syria,” said Rashed Tabshi, a former interior designer from the Aziziyeh neighbourhood now living in the southern Turkish border town of Gaziantep. Fares Shehabi, a businessman and now a city parliamentarian recalls pre-war Aleppo wistfully: “In 2011, Aleppo was one of the most beautiful cities in the world and we never thought of leaving it,” he said.

For five years, Aleppo has been the theatre for bitter violence between the government of Bashar al-Assad and the numerous rebel opposition. The continual bombing of the city over this period, by foreign powers, has been compared to Guernica. Both have erased almost all trace of the beauty and opulence that the city was known for.

The daily struggle for water and education

According the Radek Rzehak, the UN’s chief field officer in Syria, there are an estimated 1.8 million people living in the city without access to their main source of water. The so-called Islamic State took control of it in January and UNICEF has needed to provide upwards of 10 million litres of water by truck each day.

While the primary focus of the UN is to restore the water supply to the city, there has also been a concerted effort to provide education to the children of the city. Some of these children have spent 4 years not reading books, but dodging bullets.

The classes that the UN can provide are hugely overcrowded, and children are having to alternate with others so that access is equal. Given the trauma and violence that they have been witness to, it is a challenge for both children and teachers to get accustomed to the mundanity of the classroom.

When school is out, children are also able to attend any of the 70 child service spaces that UNICEF has opened, where children “can come and play but at the same time we can do serious work with these children on assistance, sorting out the problems in the families.” This also involves the ominous task of teaching the children how to identify explosives left behind by the warring factions.

The daunting prospect of rebuilding a city

With no official peace deal signed and continuing violence in other parts of Syria, it is unlikely that the western powers opposed to Assad will contribute to Aleppo’s redevelopment. Indeed, his allies Russia and Iran have not shown any inclination that they are willing shoulder any of the cost. There is also a fear that Assad will rebuild the city but only for those who support him, leaving millions of refugees with no home to return to.

Abdullah Al Dardari, deputy executive secretary for the U.N. Economic and Social Commission for West Asia estimates the damage in Syria to cost $350 billion, with Aleppo taking $52 billion alone. “The economic damage is beyond calculation at the moment,” Al Dardari said.

With no consensus, and rivalries between the nations involved remaining, it is hard to see rebuilding taking place in the near future. It would likely take peace, and an accord between the western powers, Russia and Turkey for a plan of any kind to take shape.

So while a tentative hope has risen in Assad-controlled Aleppo, the prospect of the once busy streets and industries returning is distant. Al Dardari suggests that even if these were to return tomorrow, there are certain aspects of the city that cannot return: “There is no number on earth that can be put on the loss (of) the historical, archaeological and cultural.”