Trump used his election campaign to call for more air raids against ISIS, but the chief of the American Air Force is speaking out against this strategy.

Trump used his election campaign to call for more air raids against ISIS, but the chief of the American Air Force is speaking out against this strategy.

The United States Air Force has received the Trump administration’s plans to intensify air raids on the jihadist militia ISIS with some scepticism. A stronger deployment of more air power would have to be coupled with an equivalent advance of anti-ISIS forces on the ground said General David Goldfein.

During his election campaign, Donald Trump repeatedly called on the positions 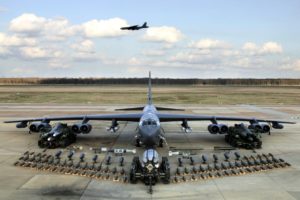 of the Islamic State in Syria and Iraq to be attacked more ferociously, hoping to “eradicate” them. Since his election, he has given military leaders until the end of February to submit a new plan to fight the militia.

US Air Force General Goldfien warned that an intensification of air raids and a loosening of regulations could increase the number of civilian casualties. He argues that short-term advances that would be achieved by a dramatic increase in airstrikes could ultimately fade if a long term strategy is not properly implemented.