The suicide attack, that most shocking tactic of terrorists and insurgents, has never been more commonplace than it is today. While a global phenomenon used by groups across the ideological spectrum, nowhere has it been more prevalent than in Syria and Iraq, where suicide operations on behalf of Abu Bakr al-Baghdadi’s Islamic State have become a daily occurrence.

Adopting an approach towards suicide that is, tactically speaking, more in line with the kamikaze pilots of Imperial Japan than the terrorists of al-Qa’ida in the 2000s, the Islamic State has militarised martyrdom more sustainably than any other non-state actor to date. Indeed, it has made violent self-immolation a pillar of its insurgency – an act to which, by its own count, many hundreds have aspired.

In my latest paper, I explore the Islamic State’s martyrdom economy over the course of 12 months, using an exhaustive sample of its suicide reporting as a window into the phenomenon’s tactical and strategic underpinnings.

I statistically analyse the 923 suicide operations that were individually reported by the group’s official media between 1 December 2015 and 30 November 2016*, examining when, how, and where the Islamic State used suicide tactics, as well as who its suicide fighters are. 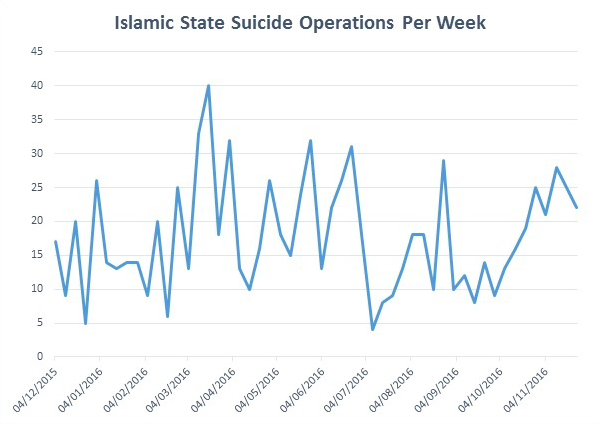 The events of March 2016 offer a window into this phenomenon: that month, after weeks of sustained territorial losses all over Iraq, the Islamic State conducted a nationwide, suicide-led counter-offensive. These attacks were not geared towards capturing territory (there has been no real strategic offensive in Iraq since 2015). Rather, they were an attempt to destabilise security in general and derail operations geared towards preparing the ground for large future offensives.

That these attacks all were mounted within quick succession and close proximity of each other suggests a high degree of centralisation. This reflects a new phase of operationalisation; a tactical shift with strategic implications that will change the insurgent and terrorist landscape for years to come.