No More 'Americanos' in Putin's Russia

No More 'Americanos' in Putin's Russia

In a new patriotic trend, anti-American sentiment has led to some novel changes

In a new patriotic trend, anti-American sentiment has led to some novel changes

This has led some bar owners to change the names of the drinks on offer, in a bizarrely patriotic move.

Other famous cocktails with American place names like Bronx and Manhattan have been relocated to Biryulyovo and Maryina Roscha.

One venue announced via Facebook, “We have changed all the politically incorrect names on our menu to our Russian, patriotic ones,”

This anti-American sentiment has been growing steadily in Russia for years, especially after the Obama administration enforced santions over Moscow’s annexation of Crimea.

This latest piece of the puzzle is a more humorous reaction. It started when Medvedev, attending an intergovernmental conference of Eurasian leaders Wednesday, rebuked a participant who asked for an “Americano.”

“Actually, this is not politically correct at all. Let’s rename it,” Medvedev said; a member of the Armenian delegation yelled out “Russiano,” and a trend was born.

Even a Russian branch of the American fast-food chain, Burger King, quickly came out with a Russiano to replace its Americano, stating, “Burger King has heeded the advice of Prime Minister Dmitry Medvedev and renamed its regular coffee at some of its stores ‘Russiano,’” 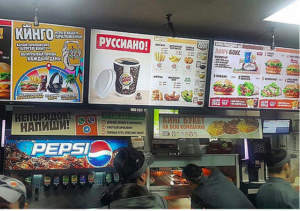 And Russianos started popping up all over the country. This sign says “It’s even tastier because its ours.” 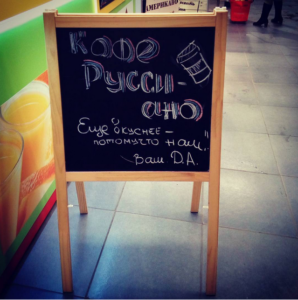 This new movement is not unfamiliar to Amerians who remember that in protest of France’s opposition to the invasion of Iraq, the U.S. House of Representatives renamed French fries and French toast in the chamber’s cafeteria as “Freedom fries” and “Freedom toast.”

In Russia we don’t say “americano” or “coffee”, we say “Russiano” and I think it’s beautiful. pic.twitter.com/2su2dvgwk3