Turkish President Recep Tayyip Erdogan has called for a review of not only it’s political ties with the European Union but also its refugee deal, after they are to hold a referendum in April on a new presidential system.

“We could maintain our economic relations but from now on, we may have the need to review ties at the political and administrative level,” said Erdogan.

Following the recent fallout from contentious back and forth remarks with European leaders, Erdogan said he will still use terms such as “fascist” or “Nazi” to criticize Europe, as long as “they keep calling me a dictator”. The Turkish president is still furious that some EU members came to the defence of the Netherlands after they denied entry to Turkish ministers who were seeking to campaign ahead of the poll.

Turkey will continue to welcome foreign investors, despite this message from its leader. Erdogan said he is warning his European counterparts, rather than threatening them.

Turkey’s foreign minister Mevlut Cavusoglu said the EU had been “wasting our time” and is re-evaluating the refugee deal with the bloc. “We can stop it unilaterally. We have not yet informed our (EU) counterparts, all of this is in our hands,” Mr Cavusoglu said. “We can say ‘we will not implement the migrant deal’. We don’t have to get permission from anyone”.

Pressure from all angles

This latest spat puts pressure on the refugee deal which was struck last year, with Turkey agreeing to monitor and control the huge numbers of refugees that were fleeing Syria in exchange for $3 billion in aid, along with new negotiations for visa-free travel for Turks in Europe’s 26 Schengen countries and a pledge to “re-energize” Turkey’s EU membership talks.

However, this yet again throws Turkey’s status as a potential new member state of the EU into further disarray. European officials have publicy voiced their scepticism of Turkey joining the bloc, along with their disapproval of the referendum on whether to grant Erdogan’s office executive power – a move that would surely undermine democracy in a key NATO ally.

When asked if Turkey is preparing any radical steps regarding the refugee deal with Europe, Erdogan responded: “April 16 will determine many things. We will sit down with the government and review all of these A to Z.” 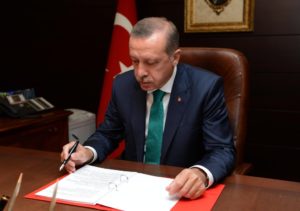 April 16 sees a referendum on the executive powers of his presidential office, a move that will all but confirm Erdogan as a dictator if he is successful in the vote – so he is looking to exploit the situation, rallying nationalist support in the upcoming vote by portraying himself as the protector of Turkish interests.

If he lost the referendum, it would prolong the current crisis and would increase the risk of overkill.

These comments by Erdogan came after the European Commission summoned Turkey’s ambassador for an explanation, but Erdogan said that if the EU doesn’t change its attitude toward Turkey then “no European, Westerner can walk safely in any part of the world,” an ominous statement.

In an interview with Luxembourg’s Tageblatt newspaper, European Commission President Jean-Claude Juncker said Turkey “is now clearly increasingly retreating from Europe”. He went on to say that it’s not because the European Union is pushing this agenda, but rather Turkish state leadership.

“The latest developments in Turkey show that the country isn’t ready to join, unless there’s a radical change of course,” Juncker said.

Turkey’s president, Recep Tayyip Erdogan, said that he may call a referendum on whether to continue with European Union accession talks.

If Turkey and the EU are unable to overcome these tensions, it would be historically bad for Turkey. This is because the EU accounts for 48% of Turkey’s exports last year, according to data from Turkey’s statistics institute.

“The Turkish government is putting domestic political considerations and the upcoming referendum ahead of bilateral relations with its largest trading partner,” said James Sawyer, an analyst at Eurasia Group in London.