This Train Almost Started a New War in the Balkans

This Train Almost Started a New War in the Balkans

Kosovo and Serbia spar over a controversial new train route with a political agenda.

Kosovo and Serbia spar over a controversial new train route with a political agenda.

A new low in relations between Serbia and Kosovo has been hit as a controversial new train journey is going forward.

The train is inscribed with “Kosovo is Serbia”, and travels from Belgrade to Kosovo. Pristina, the capital of Kosovo is sending special forces to the border, and Belgrade has responded by threatening to deploy their army.

The train, which is travelling for the first time in 18 years from Belgrade to Kosovo has created a new low in relations between the countries. 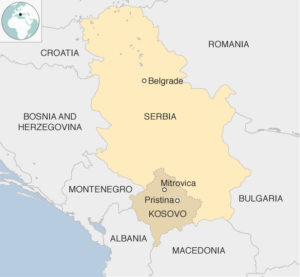 The train is adorned in the Serbian national colours and began its first journey this weekend. The inscription of “Kosovo is Serbia was used on the outer wall in 21 different languages.

Inside the train there are replicas from the Serbian Orthodox monasteries in Kosovo.

First glimpse of interior of new Russian-donated train running from Belgrade to Mitrovica, North #Kosovo. No, this really isn’t a wind-up. pic.twitter.com/d22NORDdyw

Kosovo President Hashim Thaçi has spoken out about this controversy and has asked his security forces to halt the train, dozens of special forces were waiting for the train on the other side of the border, not allowing it to cross.

“Thaçi almost caused a war because of the train,” wrote the Serbian government newspaper “Novosti” on their front page. “We sent a train, not a tank,” Serbian Prime Minister Aleksandar Vučić said.

The deployed special police unit was equipped with rifles and armored vehicles as Serbs from the region encircled the police. Vučić ordered the train to return to Belgrade in order to avoid bloodshed. he alleged that Kosovan forces were planning to blow up the tracks, and accused them of playing “war games”

“This is my last warning to the Albanians not to attempt an attack on Serbs in Kosovo,” said Vučić: “For that will not be allowed by Serbia.”

Pristina has once again asked the EU to intervene saying it “threatens our sovereignty and proves that Serbia wants to destabilize Kosovo”.

Serbia has a habit of blaming Albanians for their actions. Ramushi’s arrest, the train, but Kosovo’s the one ‘preparing a war game’ https://t.co/btOCYrhvZx

The vast majority of ethnic Albanians who live in the region agree after it was declared independent from Serbia in 2008. The Serbian government and the Kosovo Serbs still do not recognize the independence.

Kosovo was a former Serbian province inhabited by 90 percent Albanians was placed under international administration after the war of 1998-99 when 13,000 people died.

This is crucial because the normalization of the relations between Pristina and Belgrade is a prerequisite requirement for Serbia to join the EU. Kosovo is also looking to become a member. Its population is 1.8 million and is recognized globally by more than 100 states, including most EU countries and the USA.