Is a Treaty to Ban Nuclear Weapons Near?

Is a Treaty to Ban Nuclear Weapons Near?

As the human costs of nuclear destruction become more and more clear, this evidence is paving the way for a ban treaty

As the human costs of nuclear destruction become more and more clear, this evidence is paving the way for a ban treaty

Even though nuclear powers and countries that fall under their security umbrella are expected to resist efforts to ban nuclear weapons, talks begin in New York on March 27 towards an international treaty that does just this. A second round of negotiations is slated for June 15 to July 7.

On December 23, the United Nations General Assembly adopted a resolution (113 in favour, 35 against, and 13 abstaining) to launch negotiations on a treaty that prohibits nuclear weapons.

Two out of three categories of weapons of mass destruction – biological and chemical weapons – as well as landmines and cluster munitions already have strict conventions that largely ban them. The starting point for these conventions was the humanitarian impact; these weapons are so devastating that they should never be used.

But strictly speaking, the use of nuclear weapons – arguably the most destructive of them all – is currently not necessarily prohibited under international law. And countries that do not possess nuclear weapons, together with NGOs, have wanted to have them banned for a long time.

The international community witnessed the humanitarian consequences of nuclear weapons as early as 1945 with the bombing of Hiroshima and Nagasaki. But the destruction wrought on these cities by what are by today’s standards very basic nuclear bombs did not lead to their prohibition. 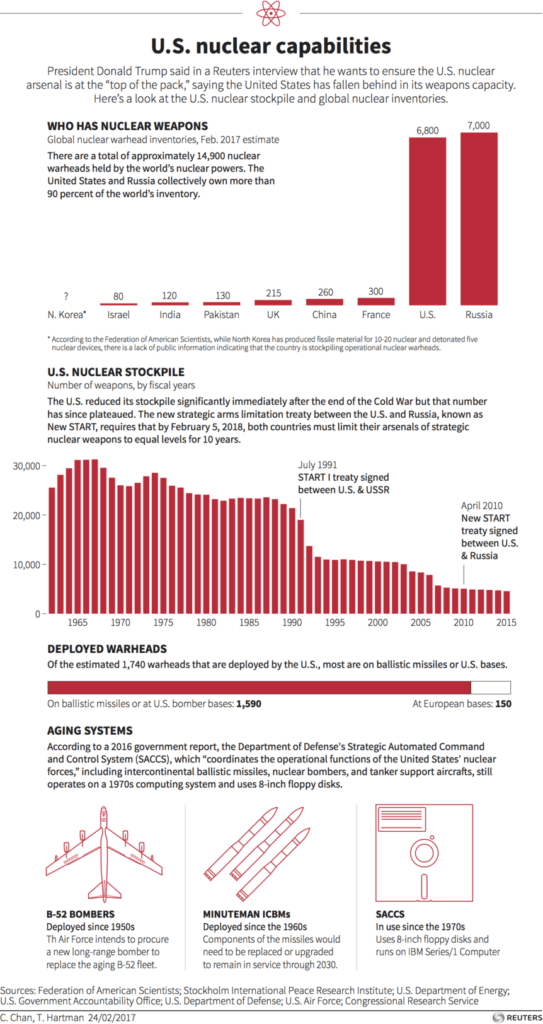 The Nuclear Nonproliferation Treaty (NPT), which came into force in 1970 and was indefinitely extended in 1995, merely prohibits the spread of such weapons. But Article IV of the document does call for parties to the agreement to negotiate “a treaty on general and complete disarmament under strict and effective international control”.

In 1996, the International Court of Justice issued an advisory opinion on the threat or use of nuclear weapons. This stated that it “would generally be contrary” to “the principles and rules of humanitarian law”.

And in 1997, a group of concerned lawyers, scientists, physicians, former diplomats, academics and activists drafted a model Nuclear Weapons Convention. Initiated by international NGOs, such as the International Association of Lawyers Against Nuclear Arms (IALANA), the model was ultimately submitted to the UN General Assembly by Costa Rica that same year.

It was revised in 2007 to include key developments since 1997 and was again submitted by Costa Rica and Malaysia to the UN General Assembly that year. It was then circulated as an official document in 2008.

In 2010, the president of the International Commission of the Red Cross highlighted the importance of humanitarian considerations in his statement about nuclear weapons in Geneva. And, at the NPT Review Conference the same year, governments officially expressed in the final document their “deep concern at the catastrophic humanitarian consequences of any use of nuclear weapons”.

States, international organisations and civil society convened conferences in 2013 and 2014 that focused on the humanitarian impact of nuclear weapons.

But although the “Humanitarian Pledge” issued in 2014 emphasised that nuclear weapons are simply too dangerous for us to permit their existence, none of the countries that possess nuclear weapons endorsed the idea. Neither did US allies protected under the country’s nuclear umbrella.

In 2016, three sessions of the UN’s Open-ended Working Group taking forward nuclear disarmament negotiations were held for a total of 15 days. These led to more than 100 countries supporting the start of negotiations on a treaty to ban nuclear weapons.

That, in turn, resulted in a UN General Assembly resolution advising states to pursue multilateral negotiations towards banning nuclear weapons in the next year. Not surprisingly, none of the countries that have nuclear weapons participated in any of the meetings. All of them will presumably not be attending the latest round of talks either.

The first group of countries are those that want a treaty prohibiting nuclear weapons based on the common understanding that the humanitarian consequences of their use cannot be ignored. Several members of this grouping have called for the creation of a nuclear weapons convention, while others have called for a stand-alone prohibition or a so-called “ban treaty”.

The second group consists of countries that depend on extended nuclear deterrence. They are calling for “progressive approach” that seeks non-legal and legal measures as “building blocks” towards a nuclear ban. These include reducing the risks of accidental and unauthorised use of nuclear weapons and bringing into force the Comprehensive Nuclear-Test-Ban Treaty.

According to their plan, only after a vision of a world free of nuclear weapons becomes a reality would a ban treaty be actually feasible to pursue.

While the first group emphasises the importance of negotiating a ban treaty, nuclear-armed states and those that fall under their umbrella are seeking to slow the process. And the gap between these two attitudes is the critical challenge for the process.

Alongside state-to-state negotiations, civil society has also been playing crucial roles on the road to negotiations. The importance of civil society groups and NGOs is recognised in Article 71 of the UN Charter.

Civil society has been active in the moves towards prohibiting nuclear weapons with strong support by grassroots movements such as the International Campaign to Abolish Nuclear Weapons, a coalition of prominent and active NGOs.

In the end, governments will make the decisions on the actual wording, demands and breadth of any ban treaty. They will also decide whether to sign and ratify it. But pressure from civil society will contribute the atmosphere for moving forward.

No one in the world can argue against the idea of a world without nuclear weapons or the total elimination of nuclear weapons. And it is not just legal provisions and measures that are important. The norms and atmosphere created by the establishment of a ban treaty, or at least efforts towards concluding one, will be a vital part of the mix.

The humanitarian consequences of using nuclear weapons play a central part in the international nuclear disarmament initiative now starting. It goes beyond traditional strategic thinking about nuclear policy and appeals to the core of mankind. After all, a single nuclear detonation may set off a chain of events that could become the harbinger for the end of the world as we know it. Clearly, none of us wants to see that.