Did Britain really just threaten to go to war with Spain? Maybe. After the stunning results of the Brexit vote last summer where the 30,000 or so residents of the small British territory of Gibraltar voted with a 95.9 percent majority to remain in the European Union, Madrid called for joint sovereignty over the territory it has long believed belongs to Spain.

British Defense Secretary Sir Michael  Fallon suggested on Sunday that Britain is ready to use military force to defend the sovereignty of Gibraltar, vowing to go “all the way” to protect the territory.

Former Conservative leader Michael Howard took it one step further and has said that the British Prime Minister, Theresa May, would be prepared to go to war to protect Gibraltar as Margaret Thatcher once did for the Falklands.

These suggestions have been immediately criticized as inflammatory, that the PM would follow in the footsteps of her predecessor 35 years ago to protect the sovereignty of Britain’s overseas territory. The last conflict with Argentina over the Falkland Islands left more than 900 dead in 10 weeks, with the British ultimately triumphing.

“Thirty-five years ago this week, another woman prime minister sent a task force halfway across the world to defend the freedom of another small group of British people against another Spanish-speaking country,” Howard said, “and I’m absolutely certain that our current prime minister will show the same resolve in standing by the people of Gibraltar.”

But May seemed to laugh off questions about military action against Spain saying that she prefers “jaw-jaw” to “war-war.”

And when asked by reporters if she had indeed lost her cool over Gibraltar, May responded, “No, our position on Gibraltar has not changed. We are very clear that we support Gibraltar, we’re working with the Government of Gibraltar and will continue to do so.”

“We want to negotiate the best possible deal for the UK and the best possible deal for Gibraltar,” said May. “When we negotiate the final [Brexit] deal … there will be 27 member states of the remaining EU that will have to agree that deal with us. But I’m confident that when it comes to agreeing that deal, they’ll see that a good deal for the UK is good for them and good for us. And I think that at the end of the day it’s that that will win through.”

Just the fact that May has to back away from comments about war with a fellow NATO ally is stunning.

The comments brought an immediate response from Liberal Democrat leader, Tim Farron. “It is unbelievable that within a week of triggering article 50 there are Conservatives already discussing potential wars with our European neighbours.

“In only a few days the Conservative right are turning long term allies into potential enemies. I hope this isn’t a sign of the government’s approach to the long negotiations to come.”

Guys, there’s a teeny weeny difference between Falklands and Gibraltar. Falklands are located over 350 miles from Argentina shores.

Here is what’s going on with Gibraltar

Gibraltar is a 2.5-square-mile peninsula at the tip of Spain that has been under British control for more than 300 years, but Spain wants it back. 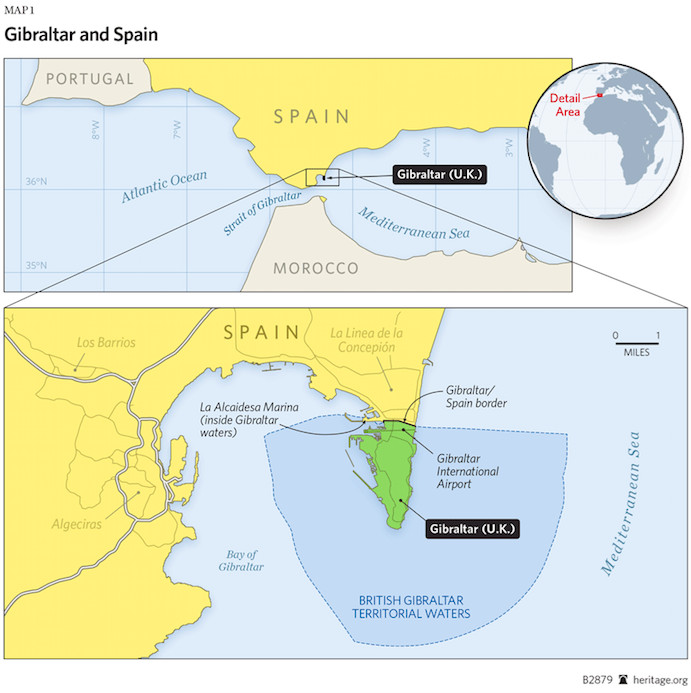 British and Dutch forces captured Gibraltar from Spain in 1704 during the War of the Spanish Succession, and Spain ceded Gibraltar to Britain in the 1713 Treaty of Utrecht at the end of the war. Gibraltar has remained under British control ever since, despite Spain’s multiple attempts to take it back.

The vast majority of Gibraltarians are British citizens with British passports who vehemently do not want to be part of Spain. In 2002, the people of Gibraltar voted in a referendum on whether the UK and Spain should share sovereignty – Gibraltarians overwhelmingly voted to remain under the sole control of the Brits.

What they want is to be part of the UK and part of the EU; largely due to the economic prosperity this arrangement has afforded them so far.

Unity between the EU and UK

Britain and the remaining members of the EU will be worse off if negotiators fail to secure a deal, as threats are still looming large over the UK withdrawing security cooperation if the Brexit talks fail. UK leaders are trying to combine both trade and counterterrorism under the same brush in order to not be left behind.

“We are stepping up security because it remains our continent and this is a very uncertain time for Europe and right we should be playing our time on that. We’d all be worse off if there wasn’t a deal – we are expecting to have a deal.” The defence secretary admitted some issues were inside the European treaties, and others (including NATO) not.

“The letter refers to our ambition to have a completely new partnership on the economic side but also on security side,” he said, arguing that stating a fact about defence capabilities wasn’t a threat.

How big can this battle for Gibraltar be? At most you can fit like 10 soldiers there. May might as well arm-wrestle the Spanish king for it.