WHY AUSTRIA IS ABOUT TO REINTRODUCE BORDER CONTROLS

WHY AUSTRIA IS ABOUT TO REINTRODUCE BORDER CONTROLS

The migrant crisis over the past few has been threatening the credibility of the European Union. Some believe that it is a moral duty to allow persecuted refugees into the European mainland, whereas others think that the free movement of migrants within the EU could create serious lapses in security. While opinions about the issue have been differing widely across European countries, the continent appears divided in its approach to tackle migrants.

Austria clamps down on influx of refugees

The latest to join the bandwagon in tightening measures against refugees is Austria. It has been revealed that Austria has now set a cap on asylum claims, limiting the number of migrants who can enter the country on humanitarian grounds. This is quite a contrast to the approach adopted by its neighbour Germany, which has been advocating for acceptance of migrants on grounds of compassion and generosity. Austria is all set to implement a daily quota on asylum claims.  The country’s Interior Minister announced, “It is a matter of common sense to secure our borders as long as there is no European solution. I see it as our responsibility, to maintain security, order and the quality of life in Austria for our citizens. We cannot cope with the number of asylum applications that we had last year. That is why we impose limits on the stream of refugees. Another step is the introduction of daily quotas.”

Why is Austria’s stand of refugees so crucial?

In 2015, Austria had taken in 90,000 refugees, but now plans to drastically reduce the number to 37,500. In fact many other EU countries are taking a stand against migrants, with several countries temporarily imposing border controls. However, Austria’s decision is a crucial one, as this country is an important transit point for refugees seeking to enter the ever-welcoming safe haven of Germany. If Austria is now constricting entry, this means that refugees will face a big hurdle in utilising the facilities that Germany is offering.

According to a recent report published by the BBC, a large majority of the migrants arriving in the EU are due to the horrific violence in Syria. Here’s a graph illustrating the origins of migrants: 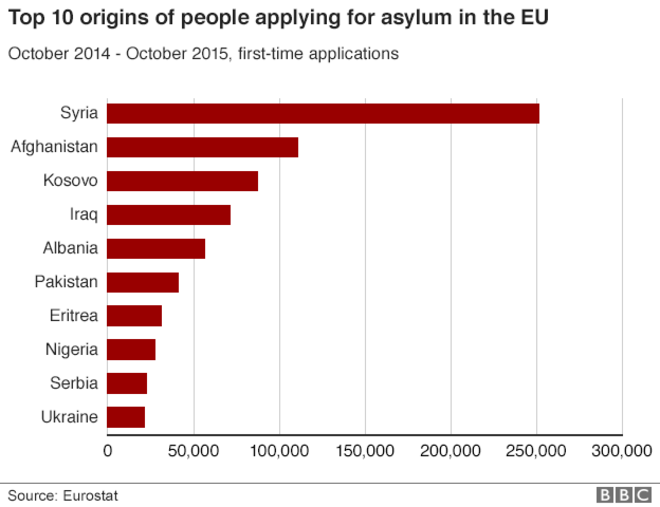 If this is the case, then the EU needs to consider humanitarian ideals when making decisions to control migration. Civilians in Syria are in dire need of the opportunity to lead safe lives, and the international community should step up to the challenge positively.