THE BIGGEST TRUMP LIE: NOT HIS MONEY FOR HIS CAMPAIGN

THE BIGGEST TRUMP LIE: NOT HIS MONEY FOR HIS CAMPAIGN

Loans from his companies, donors have to pay him back

Loans from his companies, donors have to pay him back

Donald Trump is notorious for being a bit over the top. However, there is no excuse for a Presidential candidate to outright lie. Trump has now lied to everyone: he said he has money for a campaign, but in truth, his campaign is almost broke.

Trump has lied multiple times before, but one strong focus from Trump was that he was funding the campaign himself. While he has funded a lot of it himself, about $20 million dollars has come as outside money. Trump has contributed around $45 million himself, so that means that 30% of his campaign finance comes from other sources.

Additionally, the “self-financing” portion of Trump is a bit deceitful. He is self financing in the same way as students take loans to “self-finance” their education. He has structured almost all of that he as spent as loans received from the candidate’s enterprises. While this seems self-financed, those loans will have to be repaid, and during a national campaign, Trump would expect the loans to be repaid from donors like you.

How much has Trump ACTUALLY donated to his campaign? According to his FEC reports, as of June he has donated $ 395,508 That is it. All the rest of his financing has come from loans that will have to be repaid as well as from outside money.

So is Trump financing the election himself? Not really.

Even with all this information, Trump really faces an uphill battle. With recent setbacks, and Republican support running for the hills when it comes to a Vice Presidential nominee, Trump is fading behind. And with only $1.3 million cash left at the end of the month, Trump’s wallet is empty. A national campaign can be extremely expensive, and the pockets of his friends seem to be shallow. In fact, direct contributions amount only to $17 million, with another $3 million in Super PAC money. This may seem like a lot until we compare it with the other candidates:

The size of that Clinton campaign ad buy now stands at $17 million, per our ad-tracking sources, as more orders have come in 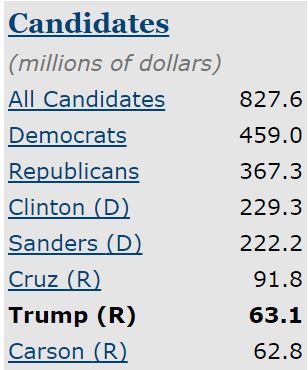 It is truly remarkable that Trump has been able to come so far with so little. Clinton and Sanders have raised a huge amount of money compared to Trump, and even Ted Cruz, who is no longer in the race, has raised a significant amount more than Trump. Another important figure to look at is how much is being spent on the Anti-Trump cause: $47 million, including the Our  Principles PAC which spent almost $17 million. Trump is fighting a war from all sides, and his allies are not giving much support at the moment. Will he be able to last?

How has Trump done it?

The key is media buys (purchasing airtime for advertisement in the media). Trump spent only $150,000 on media buys in June, which pales in comparison to the millions that are being spent by the Clinton campaign for the swing state push. Since Trump is out of money, he will have to resort to free media. He will be tweeting constantly, and look for ways for his content to go viral. That is how Trump plans to do this: keep his words and actions in the public eye, and send what limited funds he has into travel and let him do the talking. So long as Trump occupies minutes of prime-time news each night and is on the front page of every newspaper and news website, he will be able to get more exposure than Clinton could ever buy.

Unfortunately this strategy, could further alienate Trump from the rest of the Republican party, as the things that get media exposure are typically things that are offensive and cause the Republicans to distance themselves from him. These would be incidents like his tweets after Orlando, his attacks on a judge of Mexican descent, and his plan to ban all Muslims from America. This is certainly a good stop-gap plan, but it is unlikely to work out in the long run. Trump needs to reign it in until the convention on July 18-21. Once the nomination is official, Trump can do (and say) whatever he pleases, and the Republican party will have to get behind him or lose. But the consequences of Trump could be far reaching, as once he has the nomination, he will officially carry the torch of the Republican party, and his antics could seriously damage the Republican brand, and could cause numerous Republicans to lose their seats in Congress.

Regardless of the future, this will be an interesting election. With Trump out of money, what will he do? Will he resort to a guerilla marketing campaign, or will Republicans rally behind him and bail him out? Or a third option: will Trump liquidate more of his assets to finance his campaign? He would have to sell one of his properties, but maybe he is open to that.