A chain of incompetence and tragedy

A chain of incompetence and tragedy

One of the core demands of the Trump hard-core fans is: “Jail her!” – for the elimination of e-mails on her private server and the events in Benghazi.

This criminal Clinton belongs in jail!! She's a traitor and the Benghazi blood is on her hands!! https://t.co/nAdjlRZXHv

Hi, I’m Hillary Clinton and I approved of this killing. So, please vote for me for President. @HillaryClinton #Benghazi #tcot #MAGA pic.twitter.com/JntK5r8DxM

Crooked Hillary should never have made it this far. Put her in jail #Benghazi #wherestheemails #TrumpPence16

In both cases Hillary Clinton made severe mistakes.

Let us look into the facts about Benghazi.

The Benghazi attacks on the 2012 anniversary of September 11th in Libya have exposed a catalogue of intelligence failures, outdated technology and general negligence that lead to the deaths of four American personnel in a US diplomatic compound in Benghazi in September 11, 2012.

The deadly 2012 Benghazi attack against two US government buildings in the Libyan city by members of the Islamic militant group Ansar al-Sharia overwhelmed American security forces.

Accusations of incompetence and complacency before and after the deadly incident have dogged the Obama administration, not least the then-secretary of state Hillary Clinton. 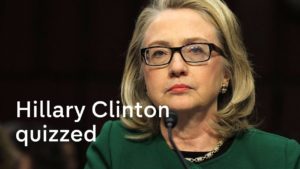 Questions over Clinton’s handling of the Benghazi attack won’t go away.

In the race for the White House Hillary Clinton’s role in the affair has been much criticized by Republican candidate  Donald Trump throughout his campaign and blemished her reputation as a ‘safe pair of hands’ to run the country.

But what happened in Benghazi on that day and what can this major new report tell us about the security of Americans abroad? The results are not happy reading…

The 800 page report has been hotly anticipated and promises to shed new light on an extremely murky time for the Obama administration.  81 new witnesses were called to provide testimony, and  75,000 new pages of documents were analysed to paint a complete picture of what happened on the ground and the intelligence failings that surrounded it.

Let Down by Politicians

The issue of keeping Americans safe abroad has been an unwelcome one for Hillary at these most recent debates. The Benghazi affair has prompted questions about her priorities when it comes to both the security of the country and her personal files. Her decision to use a Blackberry phone rather than a secure route for official correspondence, and the subsequent loss of important emails relating to Benghazi, has become a nasty blemish on her governmental record. 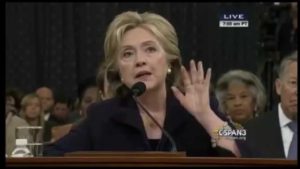 Hillary Clinton was quizzed multiple times over the Benghazi attacks.

In response to the report, many have also decried the situation that the victims of Benghazi were placed by their own government.

Representative  Susan Brooks commented in a statement, “President Obama has said his worst mistake was ‘failing to plan for the day after … intervening in Libya.’ As a result of this ‘lead from behind’ foreign policy, the Libyan people were forced to make the dismal trade of the tyranny of Qadhafi for the terror of ISIS, Al-Qaeda and others. Although the State Department considered Libya a grave risk to American diplomats in 2011 and 2012, our people remained in a largely unprotected, unofficial facility that one diplomatic security agent the committee interviewed characterized as ‘a suicide mission.’”

We will have to see how this incident defines Mrs Clinton, but it is clear that there are many lessons from Benghazi still to learn.